Pharmacogenetic testing is the combined study of medications and inherited genetic traits. By conducting genetic testing, physicians can work to develop personalized treatment protocols to enhance therapeutic initiatives and ensure that patients are receiving the proper medication at the earliest point in treatment. 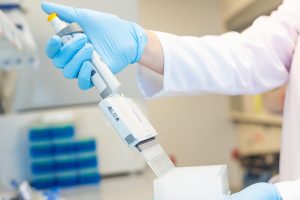 Addiction Labs has one of the most robust and comprehensive addiction treatment-focused testing menus in the nation and can test for more than 29 drug classes and 190 metabolites. The testing menu includes:

Patients with addiction problems typically have co-occurring health issues—many of which are serious— that must be assessed. Co-morbid medical conditions can hinder the recovery process and increase the risk of relapse or even death. To understand the whole patient, the lab also offers testing in hematology, chemistry, infectious disease and hormone levels, among others. This philosophy of treating the whole person enables medical professionals to accurately monitor the effectiveness of the patient’s treatment regimen, giving them their best chance at achieving long-term sobriety.

A nationally known toxicologist and a team of geneticists oversee Addiction Labs’ research about the role of genetics in addiction. This work continues to advance pharmacokinetics, how patients process medication; and pharmacodynamics, how medication affects the patient. Researchers also continue to identify additional traits that can contribute to addiction vulnerability; suggest better treatment guidelines; and aid providers in achieving better patient outcomes.

A Monthly Report for Members
of the American Hospital Association and the
National Association for Behavioral Healthcare
www.aha.org
www.nabh.org

The new statistics were published in an article in Health Affairs which reported that the rate of growth in 2017 was similar to the increases between 2008 and 2013, which preceded a faster growth rate between 2014 and 2015—a period that included insurance coverage expansion and large increases in prescription drug spending.

According to the analysis, nearly all major sources of insurance and sponsors of healthcare experienced slower growth last year. Meanwhile, the share of gross domestic product devoted to healthcare spending was 17.9 percent in 2017, similar to the share in 2016.

2. HRSA Releases Behavioral Health Workforce Projections
About 276,400 people are expected to enter the behavioral health workforce during the five-year period between 2016 and 2021, HHS’ Health Resources and Services Administration (HRSA) estimates in a new analysis.

According to a 2017 report from the Substance Abuse and Mental Health Services Administration (SAMHSA), nearly one in five adults in the United States—or about 44.7 million people—suffered from a mental illness in the last year, and in 2016 about 28.6 million people aged 12 and older used an illicit drug in the past 30 days.

“Beyond the direct toll on individuals and families,” HRSA noted on its website, “mental illness and substance use disorders are well-established drivers of disability, mortality, and healthcare costs.”

3. CMS Features FAQ on Price Transparency Provision in IPPS
CMS has released two FAQ (here and here) documents on the Affordable Care Act (ACA) requirement that all hospitals establish, update, and publish publicly online a list of the hospital’s “standard charges” for services the hospital provides.

CMS included this ACA provision—which becomes effective Jan. 1, 2019—in its final FY 2019 inpatient prospective payment system (IPPS) rule. The final rule did not include a definition of “standard charge,” but CMS noted that hospitals can make public a chargemaster “or another form of the hospital’s choice.”

CMS also said the form must be in a “machine-readable” format and added that PDF documents are not considered permissible under that definition.

4. CMS Requests Feedback on Conflict of Interest at Accrediting Organizations
The Centers for Medicare and Medicaid Services (CMS) last month requested public comment about the appropriateness of some Medicare-approved accrediting organizations (AO) offering fee-based consultative services to providers and suppliers they also accredit as part of their business model.

“CMS is seeking to receive stakeholder input which can help us determine whether the AO practices of consulting with the same facilities which they accredit could create actual or perceived conflicts of interest between the accreditation and consultative functions of the AO,” the agency said in its announcement, adding that it will consider the information it receives to help with future rulemaking.

5. Behavioral Health IT Coalition Sends Letter to CMS
In a letter to CMS last month, the Behavioral Health IT Coalition said mental health and addiction treatment providers participating in the Centers for Medicare and Medicaid Innovation (CMMI) MAT bundled payment models outlined in the new law must show e-prescribing capacity. It also said behavioral health facilities must provide evidence that they can exchange clinical data successfully with medical-surgical providers in order to be eligible for funding through these demonstrations. The final recommendation said CMS should incorporate health IT financial incentives into each of the three MAT demonstrations to urge behavioral health and substance use disorder (SUD) providers to adopt 2015 certified electronic health record technology.

“Give the severity of the opioid crisis, there is urgency to evaluate potential tools that might reduce its impact and save lives,” the report said. “This working paper is part of a series of reports assessing the evidence on and arguments made about HAT and SCSs and examining some of the issues associated with implement in the United States.”

7. JAMA Study Examines Association Between Psychotic Experiences and Risk of Suicide
Individuals with psychotic experiences are at increased risk of suicidal ideation, suicide attempts, and suicide death, according to a new JAMA study.

Recent research has shown a particularly strong association between psychotic experiences and suicidal behavior. This study’s purpose was to provide a quantitative synthesis of the literature examining the longitudinal association between psychotic experiences and subsequent “suicidal ideation, suicide attempts, and suicide deaths in the general population.”

“In 2019 the health industry will see value lines created by innovative providers and payers that have figured out how to subsist—comfortably, thank you very much—by serving almost entirely Medicaid or cash-strapped patients,” the report noted.

“Once thought to operate outside the greater U.S. economy, the industry—with its byzantine payment system, complicated regulatory barriers and reliance on face-to-face interactions—is being disrupted,” the report noted. “Finally, there’s robust evidence that what PwC calls the New Health Economy is kicking into gear.”

According to PwC’s analysis, 84 percent of Fortune 50 companies are involved with healthcare, and venture capital funding for digital health startups is projected to top $6.9 billion in 2018, reflecting a 230-percent increase from five years ago.

Meanwhile, the report noted that “American consumers have told PwC’s Health Research Institute since 2013 that they’re “eager to embrace more convenient, digitally enabled and affordable care; finally, they’re finding it, with options that resemble the choices they have in other parts of their lives.”

10. CDC’s NSVR Reports on Drugs Most Frequently Used in Overdoses: 2011-2016
Fentanyl, heroin, hydrocodone, methadone, morphine, oxycodone, alprazolam, diazepam, cocaine, and methamphetamine were the 10 most frequently mentioned drugs among drug overdose deaths that noted at least one specific drug between 2011 and 2016, according to the Centers for Disease Control and Prevention’s (CDC) National Vital Statistics Report (NVSR).

Oxycodone ranked first in 2011; heroin during 2012-2015; and fentanyl in 2015. During the study period, cocaine consistently ranked second or third, researchers found.

The report’s conclusion said these findings highlight “the importance of complete and accurate reporting in the literal text on death certificates.”

11. PCORI Board Approves $12.7 million for Mental Health Research Study
The Patient-Centered Outcomes Research Institute (PCORI) Board of Governors last month approved $12.7 million to fund a study that will examine the effectiveness of different strategies to treat anxiety and depression in expectant and new mothers.

Funding will go to researchers in Chapel Hill, N.C.; Chicago; and Toronto to study four different methods of providing treatment, in-person sessions with either a specialist provider or nurse, or the same sessions delivered via telemedicine.

“Depression and anxiety symptoms pose a significant burden and lead to high costs among mothers worldwide,” PCORI noted in an announcement about the study. “Psychological treatments—also known as talk therapies, including behavioral, cognitive and interpersonal therapies—have a robust evidence base and are preferred by women and their families over pharmacological treatments,” the announcement continued. “Unfortunately, as few as one in five women can access these effective treatments due to a dearth of available specialists and barriers including cost, transportation, and access. There is therefore a need for widely accessible, low-cost, and innovative psychological treatments for depression and anxiety during pregnancy and postpartum.”

The USPSTF notes clearly that the plan is in draft form and has been distributed for the sole purpose of gaining feedback. The task force will accept public comments through Wednesday, Jan. 16, 2019 at
8 p.m. ET.

“By catalyzing state-driven care transformation and aligning financial incentives, both models aim to improve health outcomes and address fragmentation of care for affected beneficiaries,” the Innovation Center noted. “Ultimately, the InCK and MOM models aim to enable better coordination of clinical care and the integration of other services critical for health, wellbeing, and recovery.”

Researchers also included recommendations on how Pennsylvania can “build on its successes, including expanding efforts in emergency departments and law enforcement to link patients to high-quality care, and requiring insurers to enhance access to non-opioid care so that patients have alternative treatments as opioid prescriptions are reduced.”

16. Associations Among Motor Activity, Sleep, Energy & Mood Could Suggest New Focus for Depression Treatment
Instability in activity and sleep systems could lead to mood changes—which could suggest new approaches for depression treatment, according to new findings published online in the journal JAMA Psychiatry.

Current theories of depression suggest that sleep problems, low energy, and low activity levels result from depressed mood, but this new study that examines these factors among people with bipolar disorder or depression suggest the opposite may be true, the National Institute of Mental Health noted in its announcement about the study.

A panel discussion titled Ensure Resources and an Integrated Care Continuum Support Treatment and Recovery will be hosted on the second day of the conference. Click here to learn more and register for the meeting.

Your ticket for the: American Addiction Centers