Thomas R. lnsel, M.D., a psychiatrist and neuroscientist, is a co-founder and President of Mindstrong Health.  Since May 2019, he has been a special advisor to California Governor Gavin Newsom and Chair of the Board of the Steinberg Institute in Sacramento, California.

From 2002-2015, Dr. Insel served as Director of the National Institute of Mental Health (NIMH), the component of the National Institutes of Health (NIH) committed to research on mental disorders. Prior to serving as NIMH Director, Dr. lnsel was Professor of Psychiatry at Emory University, where he was founding director of the Center for Behavioral Neuroscience in Atlanta.

Dr. Insel is a member of the National Academy of Medicine and has received numerous national and international awards including honorary degrees in the United States and Europe.

Judy Collins is an award-winning singer-songwriter esteemed for her imaginative interpretations of traditional and contemporary folk standards and her own poetically poignant original compositions. Her stunning rendition of Joni Mitchell’s “Both Sides Now” from her landmark 1967 album, Wildflowers, has been entered into the Grammy Hall of Fame. Judy’s dreamy and sweetly intimate version of “Send in the Clowns,” a ballad written by Stephen Sondheim for the Broadway musical A Little Night Music, won “Song of the Year” at the 1975 Grammy Awards. She’s garnered several top-ten hits gold- and platinum-selling albums. Recently, contemporary and classic artists such as Rufus Wainwright, Shawn Colvin, Dolly Parton, Joan Baez, and Leonard Cohen honored her legacy with the album Born to the Breed: A Tribute to Judy Collins.

Judy Collins is as creatively vigorous as ever, writing, touring worldwide, and nurturing fresh talent. She is a modern-day Renaissance woman who is also an accomplished painter, filmmaker, record label head, musical mentor, and an in-demand keynote speaker for mental health and suicide prevention. She continues to create music of hope and healing that lights up the world and speaks to the heart.

Joshua A. Gordon, M.D., Ph.D. received his MD/PhD degrees at the University of California, San Francisco and completed his psychiatry residency and research fellowship at Columbia University. He joined the Columbia faculty in 2004 as an assistant professor in the Department of Psychiatry, where he conducted research, taught residents, and maintained a general psychiatry practice. In September 2016, he became the director of the National Institute of Mental Health.

Dr. Gordon’s research focuses on the analysis of neural activity in mice carrying mutations of relevance to psychiatric disease. His lab studies genetic models of these diseases from an integrative neuroscience perspective, focused on understanding how a given disease mutation leads to a behavioral phenotype across multiple levels of analysis. To this end, he employs a range of systems neuroscience techniques, including in vivo anesthetized and awake behaving recordings and optogenetics, which is the use of light to control neural activity. His work has direct relevance to schizophrenia, anxiety disorders, and depression.

Nathan Gonzales is the editor and publisher of Inside Elections with Nathan L. Gonzales, which provides non-partisan analysis of campaigns for Senate, House, governor and president. He was an editor, analyst, and writer for The Rothenberg Political Report for more than 13 years before taking over the company in 2015.

Mr. Gonzales can be seen regularly on CNN discussing the latest in politics, and the New York Times, the Washington Post, the Wall Street Journal, and USA Today have all sought him out for his expertise. On Election Night 2016, Nathan was an on-air analyst for Newshour on PBS after working as an off-air consultant for ABC News on their Election Night Decision Desk for 14 years.

An Oregon native, Mr. Gonzales began his career as an intern in the White House press office and has appeared on NBC’s Meet the Press and NBC Nightly News, C-SPAN’s Washington Journal, and Fox News Channel. His work has also appeared on FiveThirtyEight, WashingtonPost.com and NBCLatino.com, and in Campaigns & Elections magazine. He earned a master’s degree in political management from George Washington University and lives in Washington with his family. 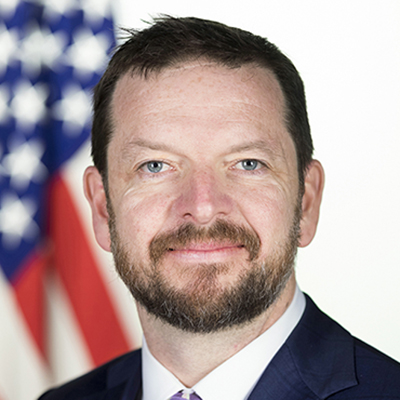 Joe Grogan currently serves as Assistant to the President and Director of the Domestic Policy Council, where he leads the Administration’s domestic policy agenda. He previously served as Associate Director for Health Programs at the Office of Management and Budget, managing the allocation and budgeting of over $1 trillion in federal spending. In the private sector, he has worked in management at leading biotechnology firms Gilead Sciences, Inc., and Amgen, Inc. During the Administration of President George W. Bush, he served as both a civil servant and in policy-making roles for over 7 years. He served as Executive Director of the Presidential Advisory Council on HIV and AIDS (PACHA), Senior Advisor to the FDA Commissioner, and Special Assistant in the Administration for Children and Families. He is a graduate of William and Mary School of Law and the University at Albany.

Debra Houry, M.D. M.P.H. is the director of the Centers for Disease Control and Prevention’s (CDC) National Center for Injury Prevention and Control (Injury Center). Since joining the CDC in October 2014, Dr. Houry has led innovative research and science-based programs to prevent injury and violence and to reduce their consequences. During Dr. Houry’s first year as the director, the Injury Center expanded support for key programs that aid states in preventing prescription drug overdose and better reporting of violent death statistics.

Dr. Houry earned her medical degree and master’s degree in public health from Tulane University and completed her residency training in emergency medicine at Denver Health Medical Center. Before joining the CDC, she served as vice chair and associate professor in the department of emergency medicine at Emory University School of Medicine and as associate professor in the departments of behavioral science and health and in environmental health at Emory’s Rollins School of Public Health.

In her career, Dr. Houry has authored more than 100 peer-reviewed publications and book chapters on injury prevention and violence, and she has been the recipient of several national awards, including the American Public Health Association’s Jay Drotman Award; the first Linda Saltzman Memorial Intimate Partner Violence Researcher Award from the Institute on Violence, Abuse, and Trauma; and the Academy of Women in Academic Emergency Medicine’s Researcher Award. Dr. Houry is a past president of the Society for Academic Emergency Medicine, the Society for Advancement of Violence and Injury Research, and the Emory University Senate.

Your ticket for the: Speakers